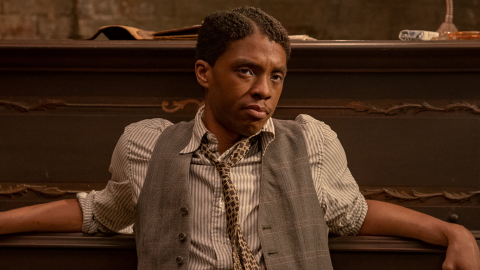 It was big news last week when it was announced that Chadwick Boseman's estate settled. You may remember that the great actor Chadwick Boseman died two years ago after a long battle with cancer.

He survived four years with colon cancer that was Stage III when discovered. He never got around to creating a will or an estate plan. If we had to guess why, we'd venture that fighting cancer while working took up all his energies and, perhaps at some point, he equated making a will/estate plan to giving up. Understandable, but the problem is, wills and estate plans are not about you, they're about the people you leave behind.

The good - extensively covered - news last week was that Boseman's estate settled. His widow, appointed administrator, chose to evenly divide the estate with his parents. They'll be no probate battle or litigation. A feel-good story . . . . . . that was a panther’s whisker away from disastrous.

When Chadwick died, he was supporting his close-knit family and his new wife. He continued working. He had appeared in two of the highest grossing movies of all time – the potential residuals are head-spinning.

He not only died intestate, he married his long-term partner, Taylor Simone Ledward, just a few months before his death. California law states that when “a person dies without a will, the spouse inherits all community property and is to split the individual’s separate property with the deceased surviving parents.” (California, like Texas, is a community property state).

The problem – Chadwick and Taylor led separate lives and had only been married for a few months, not much time to accumulate marital community property. That fact was enough to potentially throw probate into chaos. Especially when one factors in the Wild Bunch Theorem**: “Ten thousand dollars will sever a lot of family ties.”

In any event, according to the LA Times and Hollywood Reporter, the Boseman estate was settled amicably. A feel good story in a week of not-so-feel-good stories.

But, of course, it shouldn’t have been a story at all and Boseman’s heirs still lost at least $500,000 while the matter was in probate. Not to mention the stress, the strained family relationships, awkward holidays.

We suspect that the real feel-good story here is that while Chadwick didn’t have a will, he did have a plan in place: a business plan. Boseman had a company. It is not mentioned in any of the media coverage, it was not part of the probate process or the settlement. He must have had a succession plan in place.

The estate is closed but Boseman’s company has projects under development and decades of residuals from Marvel. All, undoubtedly, flowing into his production company.

The Boseman estate worked out as quietly, quickly, and amicably as a high-profile intestate matter can. That almost never happens. Not quite the one in fourteen million odds of defeating Thanos, but close enough.

Don’t mess with those odds, make an estate plan, execute a will.

** From the iconic 1969 Western, The Wild Bunch, a line every estate attorney can relate to.