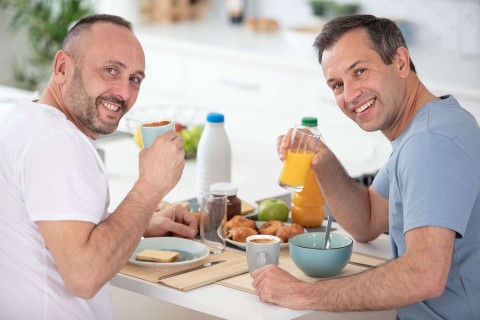 They are from Texas and New York. Our own Elaine Berkeley handled the Texas case, a scrum of law firms and lawyers are overseeing the New York case. The difference in tenses may tell you how things have gone.

In the late 1960s, Bill and Tom, both artists, bought a three-family brownstone on Horatio Street in the West Village. At the time, no one was buying real estate in Manhattan. They lived together in a one-bedroom apartment on the ground floor that opened out to a courtyard garden and rented out the other three apartments.

Bowing to the times, the deed was in Bill’s name - only.

They were partners for fifty-five years, becoming fixtures in the West Village as it gentrified. Tom was considered family by Bill’s extended family of two nieces and two nephews. For them, despite the laws of the time, there was no question of the legitimacy of their ‘uncles’ relationship.’ By all accounts, they were one, big, happy family.

Bill died in 2014 at age 92. He had had heart problems for years. Gay marriage had been legalized in New York in 2011 but for Bill and Tom travelling to City Hall was too much. Also, they rationalized that after fifty-five years together what was the point?

At first, it appeared that Bill’s nieces and nephews were fine with it – they did, after all, grow up with Bill and Tom. Then someone ‘discovered’ a scrivener’s error in the will – there was only one witness. New York law requires two. All but one of Bill’s heirs immediately moved to have the will invalidated. They succeeded. As the only ‘legal’ heirs of Bill they put the brownstone up for sale. Within days, they received a $7 million offer.

A niece assigned her share of the estate to Tom. The others claimed that “Bill and Tom were only friends,” and “Bill never wanted anything to go to Tom.”

Donald met Mike in the late ‘80s. Mike was married at the time. They fell in love. Mike filed for divorce and he and Donald went into the real estate business together. They bought a family-owned business from Mike’s parents.

In the early ‘90s, not long after Mike’s divorce was final, Donald and Mike were informally married, exchanged rings, and openly lived together as husband and husband. In 1998, they bought a home together. In 1999, Mike gave Donald a diamond band for their ten-year anniversary.

Mike named Donald as his ‘domestic partner’ on his health insurance. They were each other’s life insurance, 401(k), and bank account beneficiaries.

The business did well, they kept buying and flipping houses. Throughout the years they both maintained ranches in East Texas, ranches that they each expanded by buying up neighboring property.

Finally, in 2016, they sold the business and began building their ‘dream home’ in East Texas. After the Obergefell decision was handed down, Mike and Donald were ‘ceremonially’ married.

Something in the relationship changed a few years later, Mike filed for divorce twice but never followed through.

In 2020, though, he filed again and simultaneously changed his beneficiaries and took his real estate out of a trust he and Donald had created in 2017. Until then it held all their real and personal property.

Mike, unfortunately, died before the divorce was finalized. The estate was valued almost the same as Bill’s was in New York.

There was a will – Donald was not named in it. Mike’s children raided the ranch and took almost everything, claiming it ‘belonged to dad.’ All that property was still owned by the trust.

Elaine and her team spent a year chasing down jewelry, crystal, watches, and antiques. The executor of Mike’s will was ‘willing’ to acknowledge that Mike and Donald were married – in 2016 and not a day earlier.

You cannot disinherit a spouse in New York, either. A spouse not named in a will may elect to take a percentage of an estate. Tom, however, was not a spouse as far as New York courts were concerned. Bill and Tom did not get married when it became legal in the state in 2011. Tom died before the Obergefell decision.

There was no question Bill wanted Tom to inherit everything – he wrote it out in a will. In New York, a mistake on will does not automatically invalidate it. It takes an objection. The husband of one of the niece’s, undoubtedly blinded by the $7 million price tag for the brownstone, spent weeks while ostensibly caring for Tom after Bill’s death, searching for something, anything, to impede Tom’s ownership.

He found it in a place often overlooked when there’s no question of undue influence: the witness signatures. He convinced the others to object to the will.

Without the will, Bill died intestate, the nephews and nieces get everything.

You need witnesses to establish that someone was (or is) in a common law marriage. Bill and Tom were elderly, none of their witnesses survived them.

Tom’s suit against Bill’s heirs did, however, stop the sale of the brownstone. With the prospect of years in court, the sides reached an agreement. The brownstone would be sold, Tom would get a portion of the sale and the use of his apartment until his death.

For the privilege of getting to live his remaining days in his home of fifty-five years, Tom pays the new owners $10,000/month.

Meanwhile, in Texas. Mike’s will was valid, disinheriting his spouse was not. Texas does recognize common law marriage. Elaine and her team filed an action to declare that Mike and Donald had, in fact, been married since 1989. There were plenty of witnesses, including the children who swooped in and took property that belonged to the estate.

Elaine and her team were able to get Mike’s heirs to agree to mediation. The matter was settled, Donald was pleased.

In both the New York and the Texas cases the question of whether a gay couple who lived together for years before same-sex marriage was legalized can be considered to have been in a common law marriage was not answered.

Please, only use attorneys who have long experience in estate planning and document drafting. Estate law is no place for ‘dabblers.’

It’s a glitch in the law. Yes, same sex marriage has been legal nationwide for seven years, but whether couples of long standing were in common law marriages before Obergefell is still relevant.